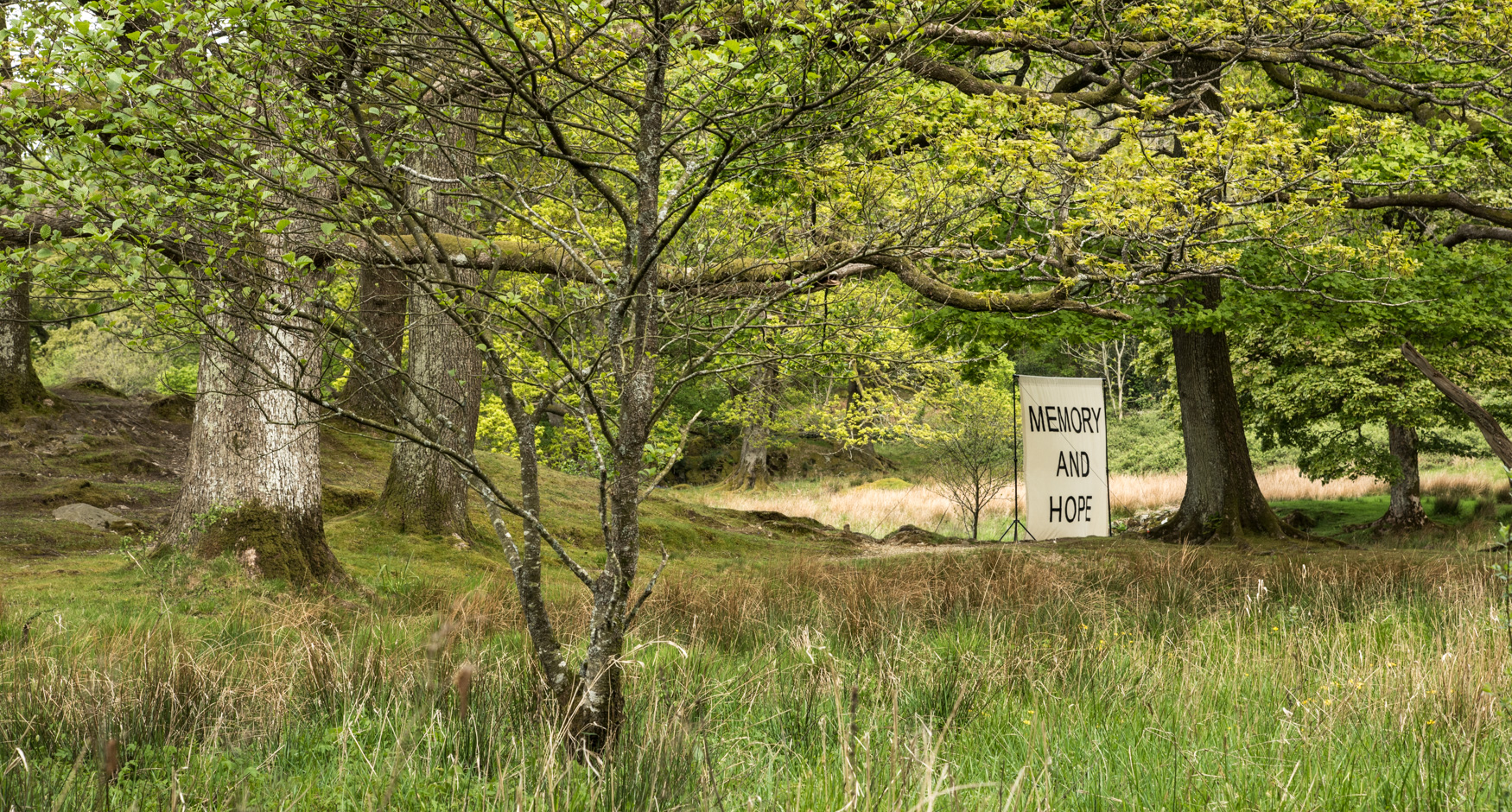 It’s bin collection day. In any case, the A591 is getting busy now it’s approaching 9am. The birds are raucous in the trees, unwittingly competing with the sound of traffic – but when there is a break in the road noise, being here is like being in a dome of sound: tweets and chits and chats and phees and phews resonate in busy conversation. And I’m here, with memory and hope.

So much hinges on these two things

What do we remember – individually and collectively? And how many of these memories are manufactured by media, by writing, by spin? Even at a personal level the truth can be slippery, our memory vulnerable to influence –  we all have that curiosity about an early memory: do I remember that actually happening, or did a photograph lay a the memory in my mind, which has construed an entire story of events and feelings?

Memories are not always reliable.

Two people in the same place at the same time, with each other in the same situation, may remember the event differently. And there are memories that offer up valuable lessons; something to hold on to, to heed, to use as a guide so as not to repeat mistakes.

Then there’s institutional memory; and how long something persist before it becomes the accepted way, the ‘right’ way, and breeds habit: ‘this is the way it’s always been done’. Now, though, as a local and global society we are at a pivotal point, when rather than being a gradual and organic adaptation to a multitude of factors, change is necessary, and it would be best if change were driven by considered, planned action. What change lies ahead in this national park, and in the way individuals and organisations care for and manage the environment, here, and elsewhere? This is where hope comes in.

What do we hope for?

What can we be brave enough to hope for? And how then do we follow up on that? When does a shared wave of hope translate into action?

In the mid-nineteenth century, German philosopher Nietzsch mused that ‘hope in reality is the worst of all evil because it prolongs the torments of man’. I used to agree with him, and think that hope was futile, ineffective in itself, based only on a fantasy projected into the future and as empty, in reality, as the fantasies we create in our creative remembering of the past. But my view is shifting – and I now think that hope can be a strong driver for what happens, as long as it is followed through with action. Rebecca Solnit, in her excellent book ‘Hope in the Dark’, sums it up nicely.

“Hope just means another world might be possible … Hope calls for action; action is impossible without hope.”

I’m standing here beneath the radiant green canopy of old oak trees, looking over a lake that’s reflecting a changing sky, grey on blue on black on white on blue. Above me, there’s a flurry of activity – long tailed tits are playing and flirting, chitting at one another, chasing, darting, flitting. A duck drifts by with eight fluffy chicks following her, and two geese honk noisily as they flap their way south.

Beyond this small green bubble, beyond this focused point of ‘here’, movements are in process. Extinction Rebellion, rewilding, the declaration of climate change emergencies, acknowledgement of the sixth mass extinction. Is there a way to move towards balance? There is hope, but hope will get nothing done without action.

Thinking about hope brings to mind the poem I wrote in June last year when I found a dead curlew chick in the meadow close to my house (published for Lost Species Remembrance Day here). The poem is about hope, and the loss of hope, but today I consider how it is also about memory. A generation of children are growing up and most will never have a chance to form a memory of a curlew, to be able to recollect the sound of watery song looping in the air, or the image of the bird in flight, long bill like a comma against the sky. If there is not memory, does this reduce the fuel for hope?

What changes over time

For the location of this canvas it’s seems quite fitting to be here in ‘Wordsworth’s space’. We’re on the shore of Rydal Water, a stone’s throw from what came to be the last home of brother and sister William and Dorothy Wordsworth, and William’s wife Mary. In their day, traffic would have meant the very occasional rattle of a cart, the plod of horse-hooves, and the trickle of conversation among walkers ambling on narrow lanes. Their memories live through Wordsworth’s poems, which still draw millions of people to the Lake District and to the Grasmere and Rydal valleys in particular.

On May 1st, 1802, Dorothy recorded in her journal: ‘We saw nothing but the holly tree and a budding elm mossed with, and the sky above our heads…’ and later, looking over ‘the overwhelming beauty of the vale below – greener than green.’ And she made a note that she heard the first cuckoo of the year. We hear no cuckoos today. And there are no elms nearby; most have disappeared now and many people of my generation and younger won’t have seen a fully grown elm. I think about the current spread of disease that is predicted to wipe out as many as 95% of the UK’s ash population; these trees too will before long be a thing of the past.

Where I’m standing, there are oaks, willows, birches, hawthorns. There are birds, bluebells, woodland flowers. I kneel in the wet earth to peer into a still pool beside the river. The shallow water is alive with tadpoles, and caddis flies are gathering small twigs to make their casing, so that it seems the sticks have grown legs and are hurrying off somewhere on important business. It’s rich, it’s abundant, it’s refreshing and inspirational. Higher up the fells, though, in parts of the Lake District the land is bare – what is my hope for that? Not trees everywhere, no, but more diversity of vegetation that can also be part of improving soil quality, and becomes part of a wider spectrum of changes that brings the quality of the environment here to something that is, for its own sake, more resilient, and in the process enriches our lives as well. On some of the fells close to Rydal water there are areas that have been planted with new trees as landscape-scale change that accommodates trees and open areas is beginning. We’ve been watching the new saplings over the past few years and it’s exciting to see they’ve now grown tall enough to send fresh leaves out above the tips of the protective casing. And where we are now, the birch trees that stand tall and are flush with fresh green leaves back up an oft-quoted phrase: the best time to plant a tree is twenty years ago, the second best time is now.

The sun has broken through the grey lid of clouds and the canvas is dappled with light – I feel its warmth and my mood lifts, I feel a new energy, and a fire: from the sun, a natural feeling of hope. What happens beyond hope? There is a wave at the moment, and it is rising, hope and passion fuelling an energy that is spurring people into action … or so it seems. Who knows?