Ings and the Dales Way 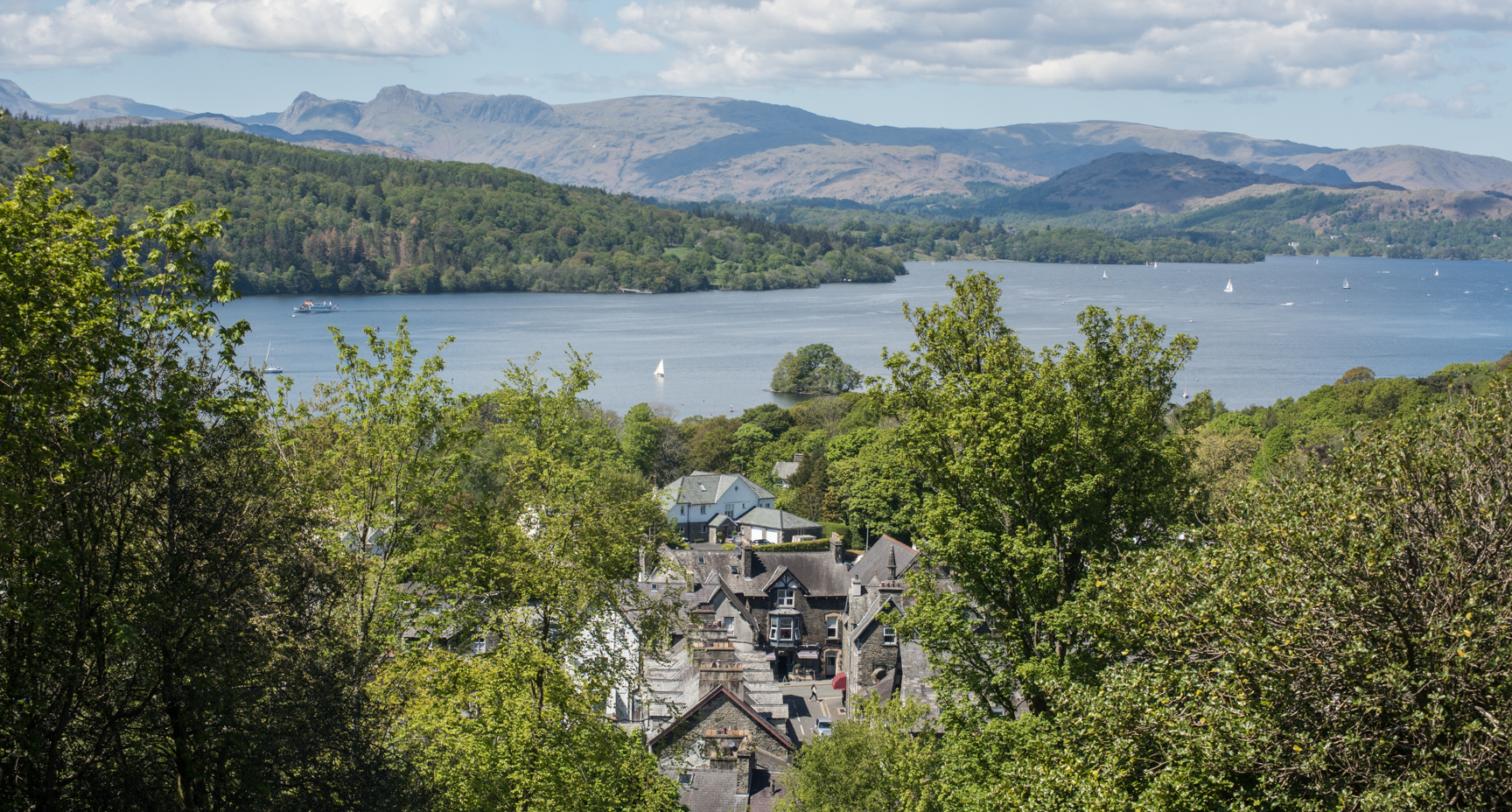 Today it is warm, and still, and green, and for the first time this year we’re starting a walk with a feeling of lightness and ease. We’re in sandals and T-shirts, and we’re carrying light packs. This puts the winter walking into perspective. And because we’ve chosen a low-level walk there’s no need to pack for the ‘second season’ of higher ground, and there’s no rain forecast. It has been warm already this year but now the warmth comes with the flush of green in the trees, with bluebells, with cuckoo flowers – and the dance of orange tip butterflies that love them – and the sound of lambs, cuckoos and curlews. Today our circular walk from Ings to Bowness and back again brings a mix of pasture, old and new woodland, clear fell and a brief stop in the tourist-busy streets of Bowness, all under a blue sky.

After a little over an hour we reach an old and beautifully sited ash that we photographed last year during our walk between the three treefolds. Up close I can see the ash is bursting into leaf. Any ash I see now I can’t stop myself from checking for signs of dieback but when I look closely at this, almost every branch has a new leaf, and I can’t see any signs of the disease. There are some ash trees (very few, perhaps as few as 3%) that are expected to survive – we will have to visit this tree at least once a year to see how it is getting on.

Beneath the ash there’s a seated huddle of ewes and lambs. Others have assembled beneath some nearby hawthorns, which are in full leaf and flowering. Those that are in full sun are joined by crows – and there seem to be a lot of crows. I hear a curlew’s alarm call and wonder if that’s anything to do with these corvids, which predate on the eggs and chicks and are an ongoing threat to the curlews’ survival as a species.

Up here there aren’t many trees, but within five minutes, as we descend towards Bowness, we’re walking between willows, crab apples, oaks and chestnuts and beech trees. The path takes us through woods all the way to the outskirts of Bowness.

The air is busy with the scent of chips, with the low mutter of different languages and the engines of buses. Swans come so close to chips and ice creams they could take them with one small extension of their necks. There are dogs, pushchairs, wheelchairs, gulls circling, babies crying. A fat Dalmatian paddles noisily in the lake where nine varnished wooden rowing boats shine in the sun.

Every tree has its own voice. In a woodland below School Knott we sit and watch the wind shake the trees in front of us and pick up a sound we’re not familiar with. The leaves quiver and shake, a tatter like paper rags blowing together, or the very hushed clapping of hands in a hundred-strong crowd.

These are aspens, which we don’t see often here in the lakes, but they are being introduced in greater numbers now. They were once widespread here, but are much loved by deer. The mother tree reproduces by sending out suckers, so rather than relying on pollination and the distribution of seed, aspens regrow from their roots. And in this way, an aspen woodland or forest can, essentially, be one single tree. We walk over to take a look at the aspen we’ve been listening to and see at least ten new trees sprouting nearby. This area is protected by fences high enough to keep the deer out, so these aspens have a chance.

I’ve been completely surprised by the woodland here. Twenty years ago I lived at the bottom of this hill and it looked entirely different, a grassy hill with only a few old oaks on it. Two women walk up the path and I ask them I they live here – they do. The trees were planted here as a community woodland in 2002 – the year I left – so I never saw the change. When the trees were first planted, they said, many locals were annoyed as the woodland had been planted on the best sledging hill, a hill where they’d once taken off from the ground and flown above the snow, they were going so fast. But their annoyance was short lived and now they love it. Their children have known only this surround of trees – this is the new normal. If the aspens continue as they’ve started, and the birch carry on their own regeneration, in another twenty years this place will look very different again – and you’ll have to go even further up the hill to get a clear view towards the central Lakeland fells.

From the rocky tops of School Knott (another name for this bit of hill) the view is wonderful – the lake spreads out, cut through by sailing boats and paddle boarders. Around the lake the lower land is thickly wooded: a dense spread of green that’s mostly native deciduous trees. And beyond these, in the higher land, the central Lakeland fells create their crinkled horizon. We both agree that while it must be nice on the tops today, we’d rather be here, wandering slowly. And we’ve only met about ten people; Scafell Pike might have as many as a hundred on the summit at any one time.

The last leg of our walk back to Ings brings a second surprise of trees: another new woodland that in just twenty years has transformed the place. Instead of open ground, now the view from here is light and shade, leaf and branch, browns and greens, the buzz of life in air, the scent of bark and bog and moss, glimpses of butterflies bright in shafts of sunlight. Where I sit as I take in the scene, an oak, no more than twenty centimetres high, is in full leaf, and may well have a chance to reach a good, old age.