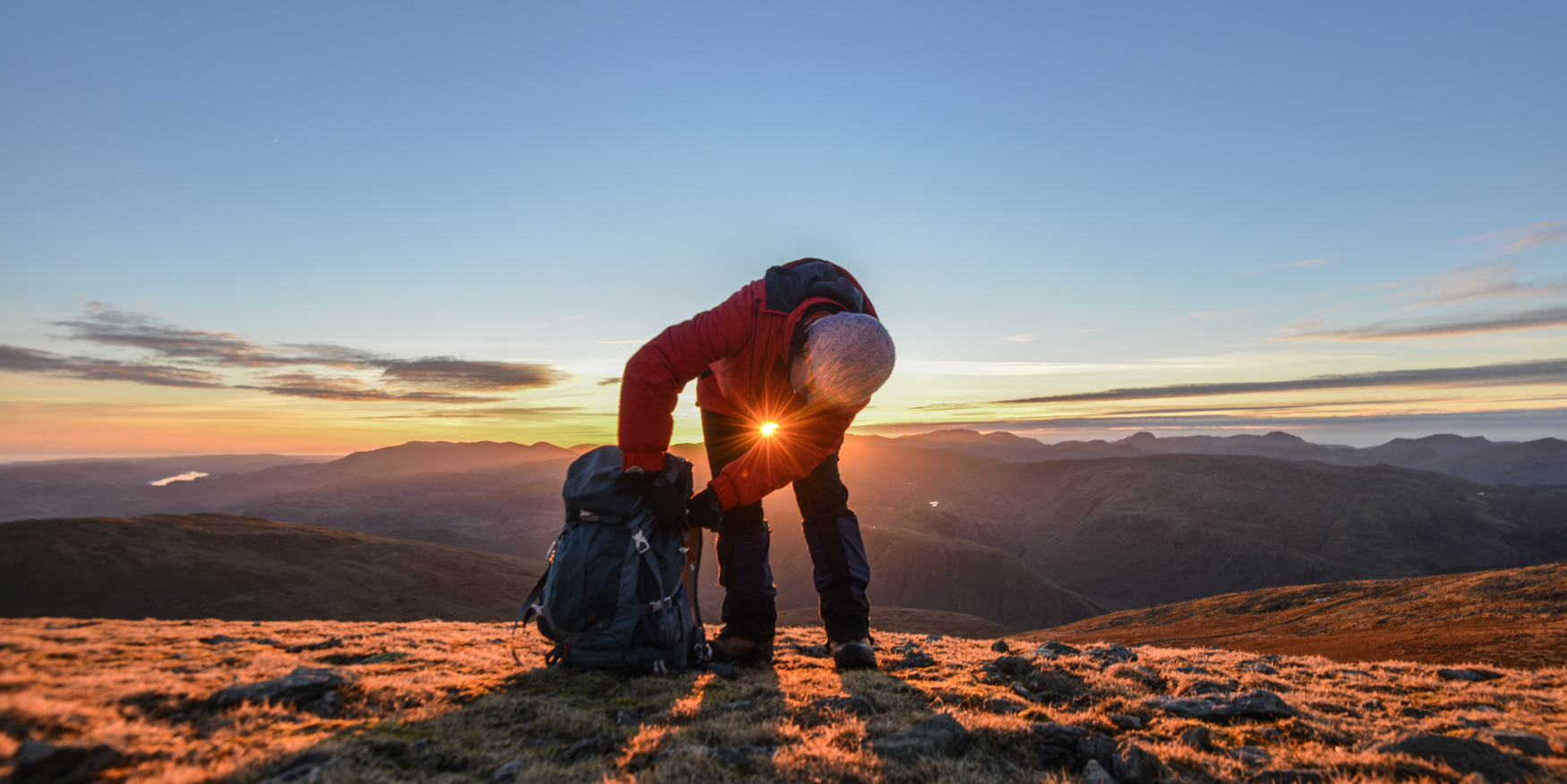 It happens within minutes. My body warms, my breathing becomes louder, deeper and sets a rhythm to suit the pace, and we gain height. My body wakens and my senses tune in to what’s around. The sun is climbing in the sky, and as it does, the shadow of the Helvellyn range shortens its reach over Wythburn, then retreats from the surface of Thirlmere, revealing, in the water, a bright sky blue.

The smell of sap and leaves comes to me as I walk between trees some fifty to sixty feet tall. I can’t stop thinking about the redwoods in California that tower to more than 360 feet, and how they would look here – my mind drifts back to a time camping beneath them, and I want to go back to lean against the vast trunks that settle their heavy selves into an earth that’s enriched with what might be a hundred million years of tree/soil growth. I’ve been reading ‘The Wild Trees’ by Richard Preston, with its mind-blowing facts about the trees and the phenomenal age of the forests where these giants grow. It throws time into perspective when you think how short a time humans have been here … and how we’ve rooted in, and changed the place so much.

Above the conifer plantations the scent of the air changes, the breeze picks up, and the view opens out across Thirlmere and north to Skiddaw, which has the lightest dusting of snow in its summit. The sky is clear, shot through with contrails, and the air carries the sound of falling water, and the occasional passing of a car driving along the A591.The slope just below me has been clear-felled some time ago. Only stumps remain, and piles of branches strewn around them. They were all pines – perhaps Douglas firs – the replanting here may be scheduled as mixed woodland. It’s something I’ll be talking to the local landowners about. This area is fenced off against deer and sheep, but higher up, where the fells are grazed, there are a few hundred trees that have been planted in individual cages. We walk up to them to see how they’re getting on – not all have made it, but there’s a reasonable collection of hazels, rowans, hawthorns, juniper and holly that are becoming well established. I’m hopeful that they’ll grow to make old trees.

We rest by the tumbled-down ruins of a hut, with huge corner stones, and I imagine the men building it.

I can see the sinews in the necks of two men strung as tight as bowstrings, sense the breath held, the arms braced, and the reddening faces, hear the sigh and half-laugh acknowledgement of a task well done as the huge stone clacks into place. There’s no need for the hut now, a relic of a time when shepherding practices were different and shepherds would sometimes stay higher up the fells with their sheep; it’s a heritage of land and hands and a way of life held in quiet memory by the fell.

Above me, the sky has lifted itself like a bird taking flight, enormous wings of blue so finely feathered all water and wind slips by, and all that’s left is the colour of a cold winter sun. Beneath me, the rocks hold ice and lichen. I’ve read that it can take hundreds of years for lichen to grow, to reach its bright yellow flush, an almost neon glow, a sky garden making its slow sure way over rocks.I am neither slow nor sure / except for these moments of stillness, joyful at the cold, at the light – speck-small me, here for less than a tick of time, less than a decimal point in the wide degrees of aeons, and all around me, air.

And now I look east. The land is glazed by sun, falls away beneath me, ribboned with black water. St Sunday’s Crag looms straight up above Grisedale Valley, its scree sides forbidding, untameable. The sun plays with the land, conducting shadows and light on the summits all around me: Place Fell, High Street, Thorneythwaite Beacon and Yoke, and further still southward – Ingleborough – and to the northeast the determined back of the Pennines. Much closer, Striding Edge catches the light, which emphasises it’s sharpness, and the jumble of split rocks on its sheer sides: it looks dangerous.

I’m being watched by a raven, and as I watch back others come by – at one stage there are seven. They are able to stop to an almost complete halt, hovering in the air with the tiniest of movements of a primary feather, or a tilt of the tail, just to turn their black eyes towards us out of curiosity. They seem to be showing off too, or playing: tumbling, twisting, diving, soaring. We become transfixed, but standing still also means we become cold, so we move on, heading from Helvellyn summit south towards Dollywagon Pike.

This route along the Dodds and over Helvellyn has never been a favourite of mine, but today I have to admit it is stunning, with lines of light and shade, hoar frost on the ground, water silver as mercury in the valley bottoms, and views stretching for miles. One of the things that I’m not drawn to here is the wide backed fells covered with little but yellowing grass. Rob and I wonder together: could there be bilberry and juniper here? Dwarf willow? I don’t know – I don’t want to undermine the beauty that does come with light and shade, the shifting shadows, the thrill of being up high and being able to see so far – but I’m curious – how might this place have looked before people settled here? Where does cultural impact become a bonus and what could change to bring some more biodiversity to the higher land?

We linger to watch the sun sink, painting the summits as it falls. The land is sent into shadow, grey layered over green, each fell writing itself on those beyond it. Lines of light write the passing of time, another day’s turn and the approach of dark, the chance for stars to show their constant conversation that twinkles blindly into day. But for now there is sun, there is warmth at my back, I stand high above the valleys and the last fell top is holding the day’s final etching of gold. My shadow falls long behind me, a brief imprint on this frosted land. Far below me the first fires have been lit, and smoke from chimneys curls into the cold air above the bruised-blue stretch of Ullswater. This small place enters into night: first the woodlands, then the sharp crags and rocks, then the valleys, and last of all the tops. In the west, clouds are pink; the eastern sky is blazing gold. A new moon rises against the darkening blue, turning its crescent back to the falling sun. There’s  no one here but us.

We turn our torches on only when it really isn’t possible any more to navigate by the faint light of the gloaming. It’s freezing, and the ground sparkles. The night brings the sound of waterfalls close and sends clouds to tease the moon, burning its bright crescent into a sky that’s as dark and blue as the deepest sea.

Posted on January 7, 2019 by somewhere nowhere