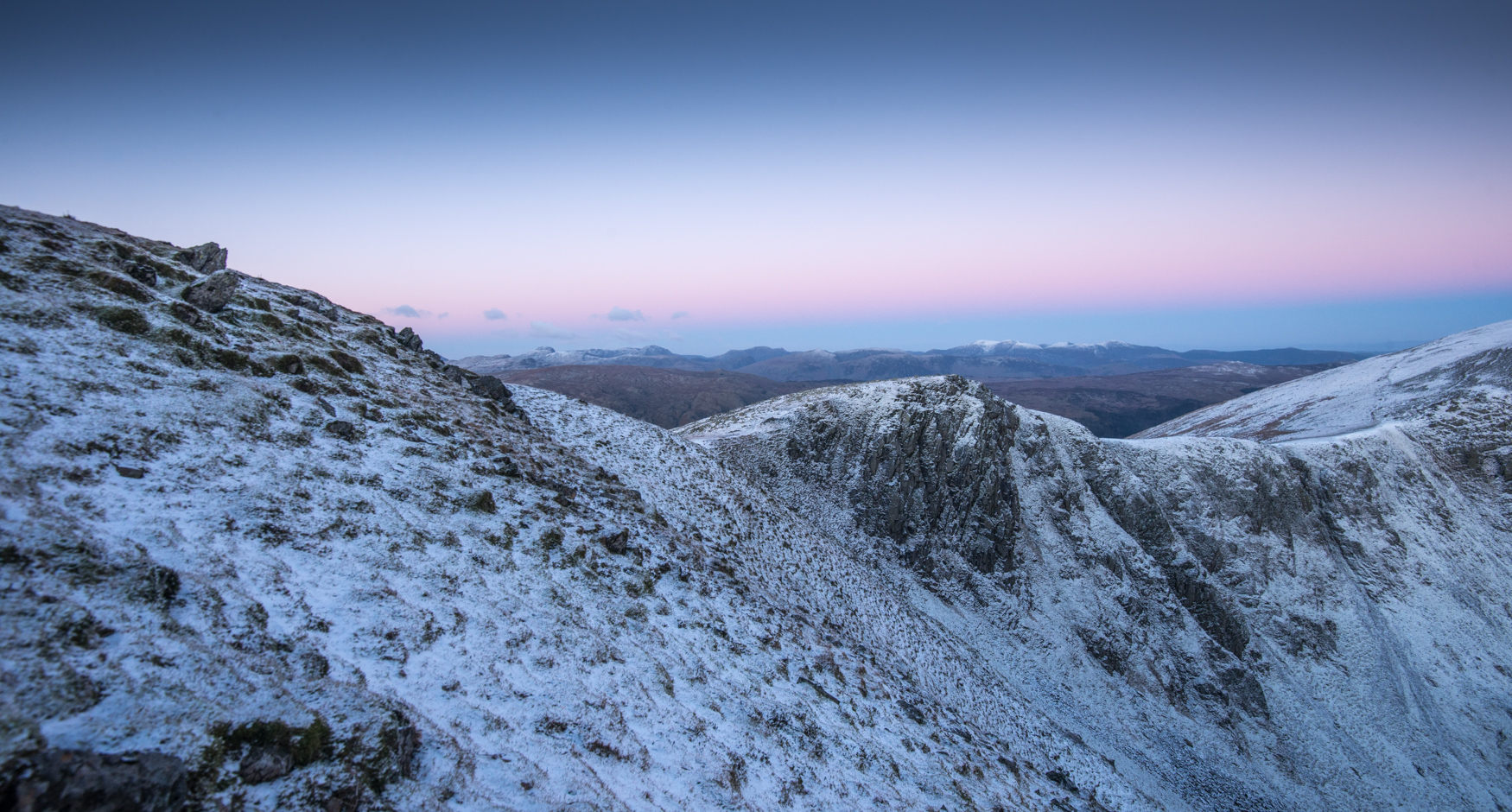 We’re driving in, listening to the radio and all the talk is about Brexit – last night the government’s deal was voted down, Corbyn called for a vote of no confidence, and there is, if there could be, even more political uncertainty than before.

Jeremy Vine is talking about hubris, complacency and dishonesty amongst the so-called leaders of the country. We’ve been quite focused on this issue but ready now to step out, take ourselves away from news and politics, and into the cold heights of the fells. We’re plugging back into the elements.

We walk, and settle into ourselves,
all is breath body, thoughts, earth, air
and the sounds of wind over water,
water over stone

This is the first of our twelve camps. We arrive at Grisedale Tarn where we’ve planned to stop for the night, so that we’ll be able to walk up to Dollywagon Pike for sunrise. We pace along the 30-degree line, seeking out a patch of dry land that’s dry and flat enough to sleep on. It’s not easy: the ground here is sloped, wet, and rocky. There’s nowhere precisely on the line but a little to the north we find enough dry grass to hold our tent, and there’s a little bit of shelter from the wind that’s steadily picking up.

We get the tent up just before the snow showers start. Then it’s time to organise ourselves – I lay out our mats and bags while Rob fetches water and begins to heat it for a cup of tea, and to a dried pack of dal and rice for our dinner. The tent is lightweight, which is brilliant for carrying but offers a lower level of insulation, so we’ve put all our warm clothes on and are now sitting in our sleeping bags, two hungry caterpillars tucking in to what tastes like the best gourmet food.

It’s good to be here. My memory had faded, of what it’s like to hunker down in the cold, in the early darkness, and look after the most important thing, which is to be warm and dry; what it’s like to sit in a small space surrounded by grass and rock and sky, and to eat simple food while the wind whistles and the cold presses in.

1846
Of course we can’t be out here and not savour the night: cold as it is, we venture out. The moon is a perfect half, a glowing pearl semi-circle sending an amber-edged corolla into a veil of slate grey cloud. It has been snowing. The come-and-go moon reveals soft whites and the scattering of dull black where rocks and boulders defy the settling of snow. The cloud is sinking lower now, hiding Dollywagon Pike, and lending a hush to this high mountain tarn. The winds have dropped – it’s as if we’re in a snow dome after it’s been shaken, and everything has changed.

Back in the tent I’m deliciously warm in my sleeping bag. The wind blows in soft gusts to ruffle the tent, and with more force throws itself at the fells to either side, with low whistles. But otherwise the only sound is water, flowing down the night hills towards Grisedale Tarn.

We’re up in darkness, battling with frozen boot laces and discovering that the water in one of our bottles has frozen solid. It has been a very, very cold night – our temperature monitor shows a reading of minus 6.7 degrees Celsius. With all our warmest clothes on we step out into the dark morning and walk away from the tent, heads down, eyes on the frozen path, climbing steadily towards the high point of Dollywagon Pike. The grass beneath our feet is crisp with snow, and the rocks are covered in ice. We watch the light intensify in the east and the fells around us begin to find their colour: the whitened tips seem to be hovering on a black wind, the valleys below them still in darkness and the sky above easing into a pale, bright blue.

0809 … On top of Dollywagon Pike the wind bites. It is brutal, and it’s hard to stay in its passage without becoming severely cold. I find a spot just off the summit, behind a boulder, where the wind is more bearable, and write for as long as my fingers will allow. Rob is made of sturdier stuff and roots himself firmly, legs wide, to capture the changing scene as the light turns the fells blue, pink, rose, then white. The wind around us roars and crashes like a sea, and for a moment the fells appear as waves, held in a frozen moment before breaking.

1228 … Being cold makes everything seem hard, and while the light gave rewards worth the view, walking for three hours in the full force of the wind with a heavy pack is a real challenge and the cold blew grumpiness into my body and spirit. It is the nature of walking in the hills: they hold moods like changing weather patterns and force them onto you.

We’re down now, though, away from the punishing winds and the land that’s definitely more than two coats colder. I’m sitting beside the stream where it burbles and glints in the light, I’ve warmed up, and relaxed. I’ve been looking, all the way down, at the low January sun playing in the hills, picking out gullies and rockfalls, bracken patches and rivers, distant tarns and stone-bare tips. I feel a sense of sadness at the singular look of the land, and what it seems to be missing: surely there could be more trees here. It’s not the first time I’ve felt this, but today it comes in waves, like the wind the tops, and I have a sense of loss that’s slightly stronger than before; the bare, wintered land feels emptier, perhaps, in the wider context – the pressing need to reverse a decline in biodiversity is global and the news is full of it. Rob and I talk about what can change here, and what has already changed, with thousands of trees planted around the gill further down the path, and below Helm Crag on the opposite side of the valley. These are all positive and important actions towards a landscape that has more of a mosaic of habitats, and we’re keeping an eye on the way things are changing.

My thoughts come back to my body and myself, here in the sunshine beside a narrow beck. And I reflect on what it was like, just hours ago, up high. It’s a different world …

Posted on January 16, 2019 by somewhere nowhere

← Jan 07, 2019 Sundown from Helvellyn
time passes like a wolf sleeping under a white sky →